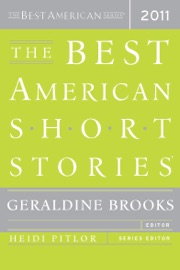 Twenty of the best American short stories of 2011, chosen by the New York Times bestselling author of The Secret Chord.

The twenty tightly crafted stories collected here by Pulitzer Prize–winning author Geraldine Brooks are full of deftly drawn characters, universal truths, and often surprising humor. Richard Powers’s “To the Measures Fall” is a comic meditation on the uses of literature in the course of a life. In the satirical “The Sleep,” Caitlin Horrocks puts her fictional prairie town to bed—the inhabitants hibernate through the long winter as a form of escape—while in Steve Millhauser’s imagined town, the citizens are visited by ghostlike apparitions in “Phantoms.” Allegra Goodman’s spare but beautiful “La Vita Nuova” finds a jilted fiancée letting her art class paint all over her wedding dress as a poignant act of release. Chimamanda Ngozi Adichie wryly captures the social change in the air in Lagos, Nigeria, in “Ceiling,” her story of a wealthy young man who is not entirely at ease with what his life has become.

As Brooks perused these richly imagined and varied landscapes, she found that it was like walking into the best kind of party, where you can hole up in a corner with old friends for a while, then launch out among interesting strangers.